She was the eldest daughter of BKS Iyengar and his wife Ramamani Iyengar. She is credited with advancing yoga for women and has often been described as one of the world's foremost yoga teachers second only to her father. When she was asked How is it to be in the shadow of BKS Iyengar? She replied I am in his light not his shadow.

Geeta Iyengar adapted her father's method of yoga to suit the various requirements of women. Specific asanas and pranayamas and sequences have been refined for the different stages in a woman's life including menstruation, pregnancy, postpartum, pre-menopause and post menopause.

After the death of her mother Geeta cared for the whole family. In addition to this she tirelessly taught regular classes and intensive courses at RIMYI, she ran the medical classes at the institute with her father and latterly on her own. Geeta had a great gift in breaking down and interpreting her father’s work, showing step by step how to approach, for those of us not quick enough to grasp Guruji’s inspirational demonstrations and instructions. After her father's passing Geetaji was told, he would say “Only Geeta sees”.

Geeta book Yoga a Gem for Women was first published in 1983. She also wrote Yoga in Action: Preliminary Course and Intermediate Course and co-authored Iyengar Yoga for Motherhood.

Geeta Iyengar periodically toured worldwide. She was a well-known figure in yoga around the world, in North America, Australias, South Africa and Europe.

Geetaji died on 16 December 2018, two days after the centenary of her father's birth. She was aged 74. The centenary celebration convention in Pune was attend by several teachers from Essex. Geeta entered in a wheel chair. She explained that she had recently been in hospital and had nearly died “but I found the strength from somewhere to come and teach.” She said she was determined not to leave this life until after Guruji’s centenary. Although very frail looking on arrival, once teaching she seemed to grow in stature and taught like a lion, with her usual strength, vigour and compassion. Her depth of knowledge and understanding shone through. 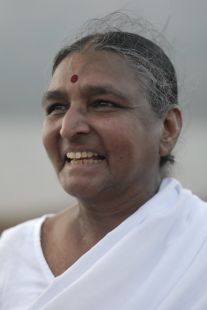